Gene and cell therapy: the new frontier of vision research

Rapid improvements in biotechnology are creating a new era in research, treatment – and possibly, reversal – of blinding eye diseases.

In barely a decade, studies in eye health have undergone a revolution. New techniques and discoveries in gene and cell therapy mean there is now hope for people who are losing their vision from diseases once considered untreatable.

Many blinding eye diseases are caused by a gap or ‘mistake’ in the blueprint for making our eye’s building blocks. Gene therapy can fix faults in this genetic code, or DNA, which stop the cell working properly.

“Gene therapy is a way of changing what cells do,” says Professor Keith Martin, Managing Director of CERA and Head of Ophthalmology at the University of Melbourne.

The instructions are delivered into the cell by using a modified ‘safe’ virus, which can’t cause infection, but is effective at getting genes into a cell.

“It’s a bit like a text message,” he says. “The virus contains information which is taken up and read by the cell, which then does what it’s told to do.”

Cell therapy transfers healthy cells from donors to patients, or reprograms a patient’s own cells into stem cells, and then into eye-specific cells, to repair vision. “Gene therapy is a way of changing what cells do,” says Professor Keith Martin.

Inherited retinal diseases (IRDs) are the most common cause of severe vision loss in working age adults.

“This can be devastating, and until recently there has been no obvious hope of a cure,” says Dr Tom Edwards, CERA’s Principal Investigator in Retinal Gene Therapy Research.

There are hopes gene therapy can deliver the breakthrough. A gene therapy developed in the United States for a form of retinitis pigmentosa has recently been approved and will be an ‘ice breaker’ for other similar therapies to follow, says Dr Edwards.

There are many types of IRDs, each of which is caused by a spelling mistake in the DNA code of critical genes.

“There are over 250 genes implicated in causing IRDs,” says Dr Edwards, “and so as a first step, it’s important to identify what gene is causing the disease.”

Once the faulty gene is identified, a specialised virus can be used to deliver a working copy of the affected gene to the retina. “This strategy is currently being applied to IRDs, but more common diseases such as age-related macular degeneration and glaucoma may be targeted in a similar manner in the future,’’ says Dr Edwards.

Dr Edwards’ team is currently investigating a gene therapy that replaces a single misspelt gene with a correct copy for reintroduction into the retinal cells.

Preclinical results are very encouraging, and there is growing conviction they are on the right track.

Glaucoma causes a gradual loss of vision and is estimated to affect more than 80 million people. It is more common as we age, and also has a strong inherited component.

If glaucoma is diagnosed early, it can be treated effectively in most cases. But untreated glaucoma leads to optic nerve damage and irreversible blindness.

Glaucoma is a challenging prospect for gene therapy because of its genetic complexity. Instead of replacing a faulty gene, the CERA team is focusing on making the optic nerve stronger and more resistant to damage.

“We’ve developed what we think is a good candidate for gene therapy for glaucoma, and we’re now planning clinical trials in the next 18 months,” says Professor Martin.

Gene therapy is also being explored for the dry form of age-related macular degeneration (AMD), for which there is currently no cure. CERA has been selected as one of the international sites for a new gene therapy for AMD that was developed in the United Kingdom.

“If this treatment is successful and safe, we hope it will lead to being able to start treating people earlier, before the disease has caused significant loss of vision,” says Professor Robyn Guymer AM, CERA’s Deputy Director and Head of Macular Research. 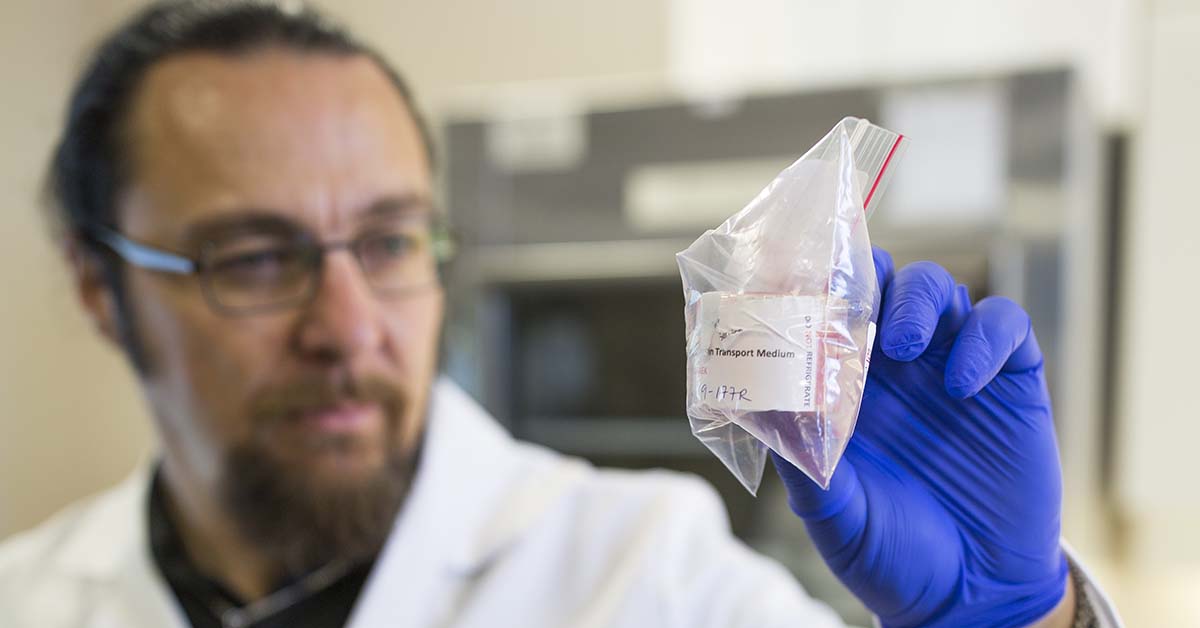 CERA has also begun engineering corneal tissue in the laboratory, which could help millions of people regain their sight.

Damage to the cornea, the clear window at the front of the eye, is a leading cause of blindness throughout the world. While corneal transplantation of donor tissue is common in Australia and the United States, there is a major shortage of donor tissue elsewhere, leaving an estimated 6.5 million people without access to this sight-saving operation.

“Many countries don’t have eye banks to safely collect corneal tissue, and in other places there can be a cultural block against donations,” says Professor Mark Daniell, Head, Corneal Research at CERA.

The team has successfully grown cells from donated corneal tissue and is now working on creating corneal cells out of stem cells taken from blood or skin. Specific cell markers are used to identify and confirm the cultured cell is in fact a corneal cell.

“We are using a technology called ‘single cell RNA gene expression analysis’ that basically looks at every piece of DNA within the cells and can provide an absolutely characteristic fingerprint of every single cell,” he says.

In this video, learn about CERA’s world-first research into gene therapies that could halt or even reverse vision loss in patients with conditions such as inherited retinal diseases and glaucoma.

Striving to strengthen the optic nerve

For patients who have lost sight to glaucoma, treatments to protect and repair the optic nerve would be life-changing. Professor Keith Martin, CERA’s Managing Director, is striving to develop therapies to achieve this.

Retinal researcher has her eye on the prize